New Generation Minister: who stands behind the digitalization of Ukraine? Russia’s full-scale invasion of Ukraine showed the significant role of modern digital technologies in ensuring the stability and flexibility of the Ukrainian state in wartime conditions. An important role in Ukraine’s ability to counter the aggressor was played by the Ministry of Digital Transformation headed by Mykhailo Fedorov. What is known about the youngest Minister in the history of modern Ukraine?

Mykhailo Fedorov was born in 1991, the year of Ukraine regaining its independence, in Vasylivka, Zaporizhzhia region. His hometown has been under occupation since February. Hard work is a key to success, and Mykhailo understood it from adolescence. Graduating from the Faculty of Sociology and Management of Zaporizhzhia University, the Higher Political School, and the Educational School of NATO Representatives in Ukraine, he was also a “student mayor of Zaporizhzhia” — the beginning of a political career. He ran a small agency called SMMStudio that wound up working on Zelenskyy’s presidential campaign in 2019. KyivPost called him a “marketer who became minister to make Ukraine digital-friendly.”

After the current President of Ukraine was elected in 2019, he appointed Mr. Fedorov, then 28, to be the Minister of Digital Transformation, putting him in charge of digitizing Ukrainian social services. From August 29, 2019, Mykhailo Fedorov is Deputy Prime Minister — Minister of Digital Transformation and the youngest member of the Cabinet of Ministers in the history of independent Ukraine. Within three months, the team of the Ministry of Digital Transformation launched a beta test of the Diia app — an application of public services. Today, Diia is actively used by citizens. It saves their time and simplifies receiving public services to a few clicks. It is created by the principle “the state is for the person, not the person is for the state”. All services of the Ministry are designed to destroy bureaucracy and corruption and build a system where interaction with the state is comfortable and convenient for every citizen.

The youngest minister in the history of Ukrainian politics, Fedorov, at the age of 30, managed to succeed both in opening his businesses as well as in leading the country’s digital revolution. His most important project as minister is the “State in a Smartphone” which aims, by 2024, to have 100% of all government services available online. The Ministry of Digital Transformation aimed to increase the number of IT specialists in Ukraine to 500,000 by 2024. Diia system contributes to reaching “a state in a smartphone” goal in a major way. In particular, the Diia portal allows Ukrainian citizens to receive many public services online, including registering a  child’s birth, registration and closure of self-proprietor status. Using Diia, Ukrainians can also sign digital documents, manage their taxes, as well as register and update their place of residency. Ukraine is also a world leader in the number of available online services for parents of newborns — the service eMalyatko (‘eBaby’) allows receiving up to 9 services related to the birth of a child in 20 minutes just by 1 application.

The Diia app shows all the documents a Ukrainian citizen could have, namely an ID card, biometric foreign passport, driver’s license, and student card. While older paper passports do not appear in the app, one can exchange them for a plastic ID. The app also provides some public services available on the portal, but not all of them. Hence, it rather serves as a vessel for digital documents. 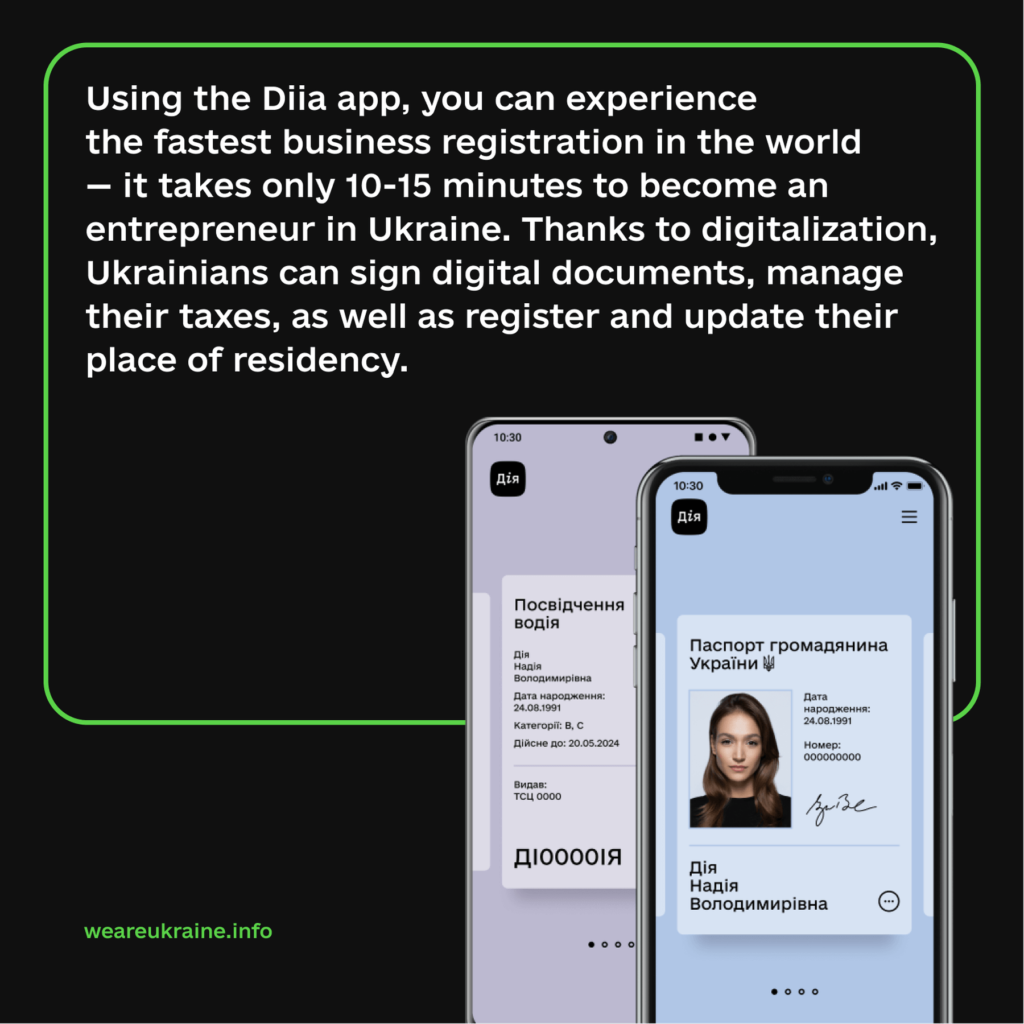 Diia.Business project is aimed at Ukrainian entrepreneurs and those who want to launch their own businesses. It consists of a webpage and offline support centers.

To promote digital services among the population, the Ministry of Digital Transformation also launched Diia.Tsyfrova osvita (Diia.Digital learning). This project aims to teach digital competency to 6 million Ukrainians by the year 2024.

Mykhailo Fedorov always aimed to become paperless not only to simplify the provision of public services but also to tackle corruption. “Bureaucracy and corruption are among the main obstacles to the digitalisation of services. After all, these are the problems that technology helps to solve,” he said.

Mykhailo`s wife, Anastasia Fedorova, is a designer and owner of the Ukrainian fashion brand COVER. They`ve been together in a happy marriage for 10 years and are raising their daughter Masha. Since the beginning of the war, Anastasia has remained in Ukraine and resumed the work of her own brand. She helps the army, supports her husband, and takes care of her family. In the interview with the Ukrainian Elle, she described her husband: “Misha is one of those who can show the society what a 21st century politician should look like in the heart of Europe. And I have the opportunity to show what the wife of a modern politician can be like.” The war became a difficult but fruitful stage in the development of the Ministry. When the war started,  Mykhailo began a campaign to rally support from multinational businesses to sunder Russia from the world economy and to cut off the country from the global internet, targeting everything — from access to new iPhones and PlayStations to Western Union money transfers and PayPal. Peter Singer, a professor at the Center on the Future of War at Arizona State University, said Mr. Fedorov had been “incredibly effective” in calling for companies to rethink their Russia connections. To achieve Russia’s isolation, Mr. Fedorov, a former tech entrepreneur, used a mix of social media, cryptocurrencies, and other digital tools. On Twitter and other social media, he pressured Apple, Google, Netflix, Intel, PayPal, and others to stop doing business in Russia. He helped form a group of volunteer hackers to wreak havoc on Russian websites and online services. His ministry also set up a cryptocurrency fund that has raised more than $60 million for the Ukrainian military.

A few days after the war started, the Ministry launched the “eVorog” chatbot that allowed people to send information about the movements of the Russian army. “If you see Russian equipment or invaders, then send the exact geolocation of their location, as well as photos and videos. To do this, you will need to confirm your identity through the Diia application,” the ministry’s press service said. All data regarding the enemy was transferred to the Armed Forces of Ukraine. On February 26, Mr. Fedorov tweeted a message to Elon Musk, the founder of Tesla and SpaceX, asking for help in obtaining Starlink satellite internet systems that are made by Mr. Musk’s company SpaceX. The technology could help Ukrainians stay online even if Russia damaged the country’s main telecommunications infrastructure. Two days after contacting Mr. Musk, a shipment of Starlink equipment arrived in Ukraine. “He acts like every Ukrainian — doing beyond his best,” said Max Chernikov, a software engineer who is supporting the volunteer group known as the IT Army of Ukraine. Fedorov said that Ukraine has created a mighty IT army with almost 300,000 people, which was joined by both Ukrainian and international IT professionals.

On May 5, President of Ukraine Volodymyr Zelenskyy announced the launch of the UNITED24 global initiative, the first component of which is an online platform to raise funds to support the state. The funds raised will be distributed in three areas: defense and demining, humanitarian and medical assistance, and reconstruction of Ukraine. The project is supported by the Cabinet of Ministers of Ukraine and the Ministry of Digital Transformation.

In August,  the General Staff of the Ukrainian Armed Forces, the Ministry of Digital Transformation, and UNITED24 launched the Army of Drones project. The Army of Drones is a multi-pronged program of the United24 fundraising platform, the General Staff of the Armed Forces of Ukraine, the Ministry of Digital Transformation, and the State Special Communications Service of Ukraine. The project seeks to buy, repair and replace drones, and train drone pilots.

Thanks to Mykhailo Fedorov, Ukraine continues to fight on the digital front, offering strong resistance from the first days of the war. Thanks to the Ministry of Digital Transformation, the difference between the standard of living and development of Ukraine and Russia is tangible and significant for the whole world.