On August 23 Ukraine celebrates the Day of the National Flag 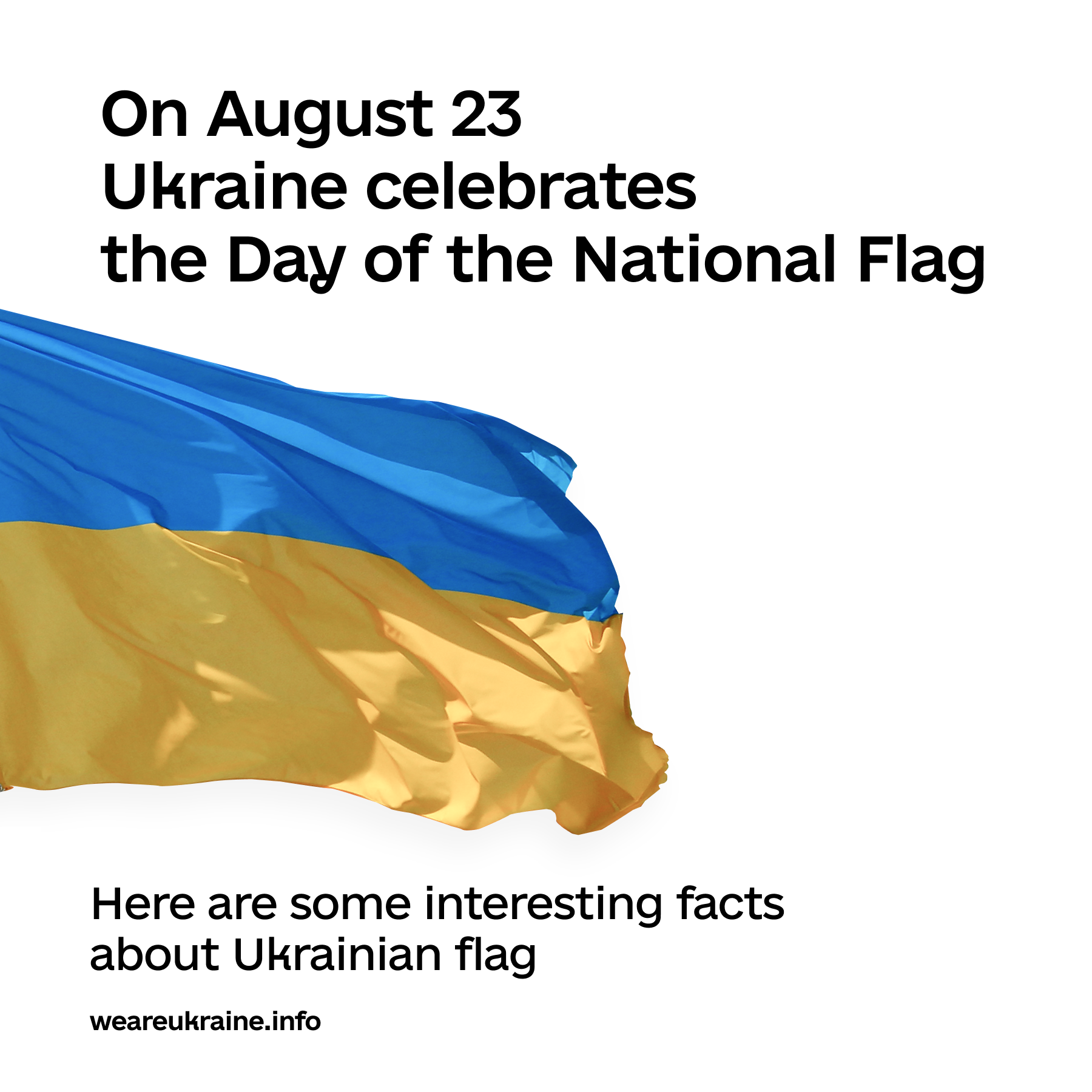 On August 23, 2022, Ukraine celebrates the Day of the National Flag. Blue and yellow bicolor received the status of the country’s official flag in September 1991 and since then has been representing Ukraine on an international level.

In modern sense the colors of the Ukrainian flag symbolize a blue sky above the yellow fields of wheat, but they also symbolize freedom, unity, bravery and resistance of Ukrainians. Ukrainians are proud of their national symbol, so they set records with the Ukrainian flag and spread its recognition around the world. Here are some interesting facts about Ukrainian flag:

On February 12, 1992, the Ukrainian flag was raised for the first time on the “Kremenchuk” sea ship in the Spanish port of Valencia. Prior to that, there was a decree that until the registry of ships of Ukraine was created, all sea vessels would sail under the Soviet flag. The captain of the vessel Vyacheslav Kislovskyi ordered the raising of the Ukrainian flag, which was sewed from blue and yellow signal flags. Leonid Kadeniuk was the first cosmonaut of the independent Ukraine and so far the only one who flew into outer space. He flew on the NASA’s Space Shuttle Columbia in 1997 and brought the Ukrainian flag to the International Space Station.

The largest painted national flag of Ukraine appeared in Kyiv in June 2014. Thousands of residents of the Ukrainian capital painted a part of the slope in Obolon district with an area of 1,750 square meters. In 2022 activists of the Obolon district of Kyiv decided to restore the flag of Ukraine on the embankment to the 32nd anniversary of the raising of the Ukrainian flag over the capital. The first Ukrainian woman that conquered Everest was a climber and athlete Iryna Halai. In 2016 she unfurled the Ukrainian flag over the biggest mountain in the world — Everest. At the Museum of Folk Architecture and Life of Ukraine in Pyrohiv, Kyiv region, a blue-yellow flag of flowers with an area of ​​about 15,000 square meters was created. The component parts of the flag were grown by Ukrainians from all over the country – they are yellow marigolds and blue petunias. According to the organizers, it was the Donbas and Kharkiv region that grew the most flowers for this record. 50 plants were planted for each square meter. “We took two crops that are not problematic to grow. This was the main criterion when selecting a flower. Here we planted 700,000 – this is the open soil of plants – and 300,000 in pots,” said florist Lilia Chernega. The longest national flag of Ukraine, three kilometers long, was unfurled between Ternopil and Khmelnytskyi regions on August 22, 2021, in honor of the 30th anniversary of Ukraine’s Independence. “We unfurled a huge state flag, 3,000 meters long, as a symbol of the unity of Ukraine,” the head of the Hukiv community Petro Ilnytskyi told reporters. The unfurled flag was entered in the “Book of Records of Ukraine” as the longest unity flag with a length of 3 km. Approximately 3,000 people took part in the action. Students from multiple schools of Chicago got together to create a mosaic of the Ukrainian flag to break a world record and raise money for Ukraine.

Using some 5,000 boxes of cereal donated by Kellogg’s, members of the Chicago Children United for Ukraine created a gigantic cereal mosaic on the floor of the Wintrust Financial Corporation’s Grand Banking Hall in downtown Chicago.

“We thought it would be a fun way to bring everyone together as a community and support the people of Ukraine,” Kotcher said. The students also created a GoFundMe page to raise money for “Razom”, a New York-based nonprofit Ukrainian-American human rights organization. The final mosaic, measured by independent surveyors, came out to 34 feet by 86 feet and required 4,932 boxes of cereal.

Those measurements will be used by Guinness to rule on records for the largest packaged food mosaic and largest cardboard box mosaic. The cereal will be donated to a local food bank, while donors have pledged nearly $15,000 to the fundraiser so far. “It’s just great because we’re helping globally and locally,” said Kotcher.