What is wrong with Russia’s rhetoric regarding Crimea? 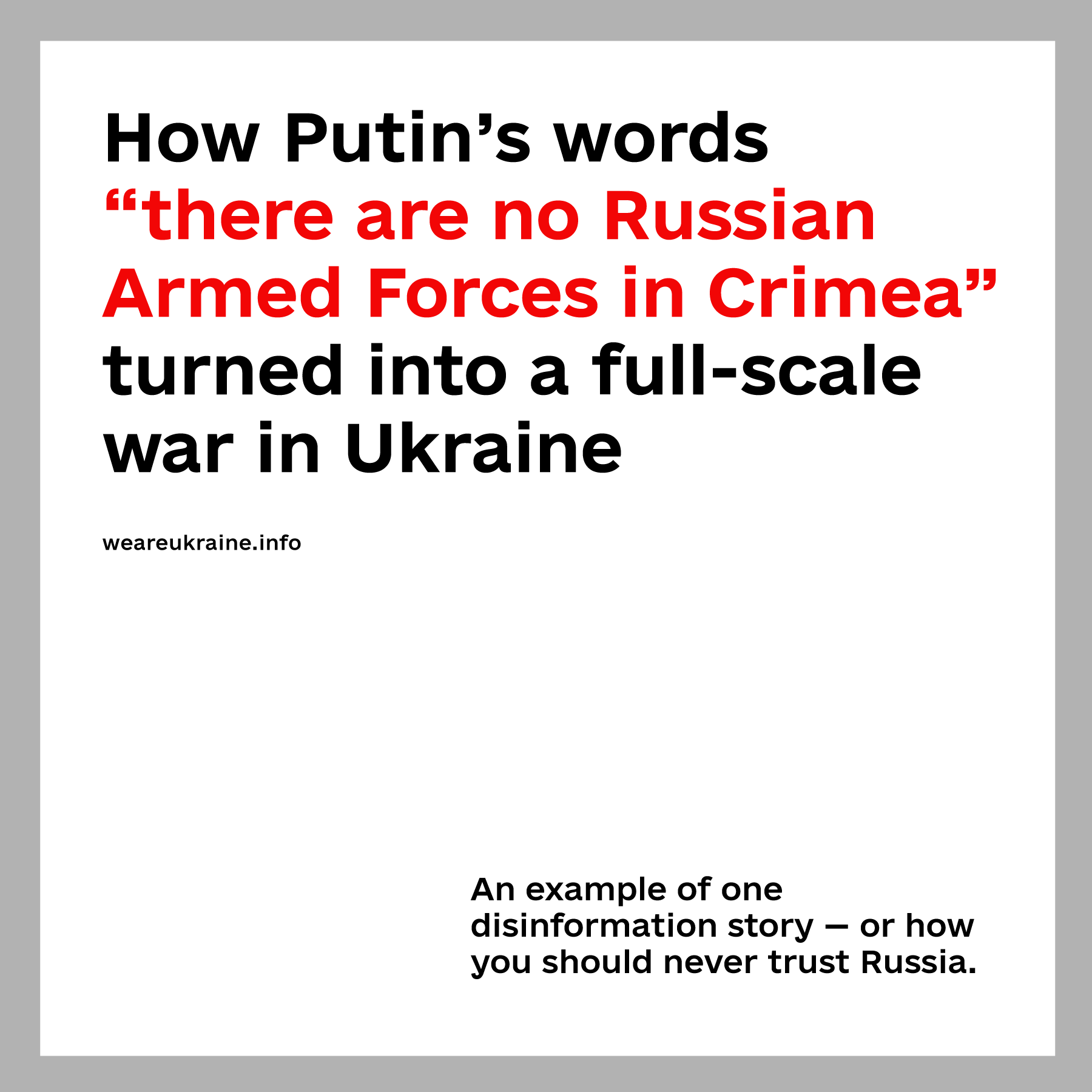 According to Russian propaganda, Crimean peninsula was “organically” and peacefully “separated” from Ukraine and сonsequently joined Russia. The Moscow reasoning of this territorial reshuffle was and still is allegedly a need to save the Crimean population from the “fascist junta” after the 2014 “coup”, namely the Revolution of Dignity. However, Russia did not say that it was part of the alternative history it created.

The truth is that Crimea did not “separate” from Ukraine, but was first occupied by Russian troops and annexed after. The seizure of Crimea by the Russian Federation started with a military invasion executed by Russian armed forces without insignia who disembarked on the territory of the peninsula on February 20, 2014. Later on these well coordinated groups became known as “little green men” who were eventually recognized as the regular Army of the Russian Federation. When in March 12, 2014 NATO identified those troops as Russian servicemen, Russian President Putin publicly denied the fact. But later Putin did recognize the opposite, proudly claiming it to be a special operation aiming to “liberate” Crimea despite previously denying their presence on the peninsula. “Green men” is a Russian propaganda cliché for the occupying forces that landed in Crimea.

On March 16, 2014, an illegal and internationally unrecognized “referendum” was held in Crimea aiming to finalize the Russian occupation of the Crimean peninsula. There were at least five reasons why it was illegal and not recognized by either Ukraine or the international community. Since then, Ukrainian and international publications put the word “referendum” in quotation marks, emphasizing that there was an occupation in Crimea, not a legitimate expression of the will of the people.

Moreover, Crimea held the status of an autonomous republic within Ukraine and could have undergone a legitimate independence process if such was the will of its population, yet it never moved to do so. Among the Crimeans, there were indeed supporters of joining Russia, but their number steadily decreased. While in 2008 about 70% of Crimeans supported the idea they became about 40% by the time of “referendum in2014. According to a poll conducted by the Kyiv International Institute of Sociology on  February 8-18th, 2014, 41% of Crimean residents wanted the peninsula to join Russia. That is why the only way for Russia to achieve the desirable result in Crimea was to occupy it and to falsify the voting. On March 6, 2014, an online poll  was conducted on the website of  Crimean TV Channel ATR asking people for their opinion on the accession of Crimea to the Russian Federation. The majority of participants, 82, 2% voted against it. Consequently, the Russian authorities in Crimea shut down the channel from the web on March 7, 2014.

Russian propaganda operates by way of manipulating information into saying what Russia wants it to say. At various stages of his preparation of the aggression, Putin voiced different goals of Russia in his aggression against Ukraine, often communicating conflicting versions of allegedly desired outcomes and swiftly going from a resolution of the conflict in Donbas to de-Ukrainization to wishing for  an end of the alleged US dominance in the global political arena. Therefore, it is quite important to know how the rhetoric of Putin’s public statements has changed in recent years. If we follow Russia’s position on any issue, we will see that inconsistency in messaging and constant administration of misinformation had both in fact become weaponized to lead on supporters and keep foreign audiences unaware of Russia’s long-term goals.

We decided to trace the changes of Russia’s rhetoric and remind our audience of how Russia’s justifications for its aggressive actions in Ukraine and the annexation of Crimea changed from one day to another. When Putin is building his propaganda on his imperialistic desires and fantasies, it comes as no surprise that his statements are inconsistent.

In 2008, Putin said that Crimea was not a disputed territory and it was a part of Ukraine

Putin said in his temper flaring that Russia recognized all of Ukraine’s borders and he added that there was no ethnic tensions in Crimea at all.

Later on, however, he would cite ethnic tensions as a key reason for Russia’s illegal occupation of the peninsula in 2014. 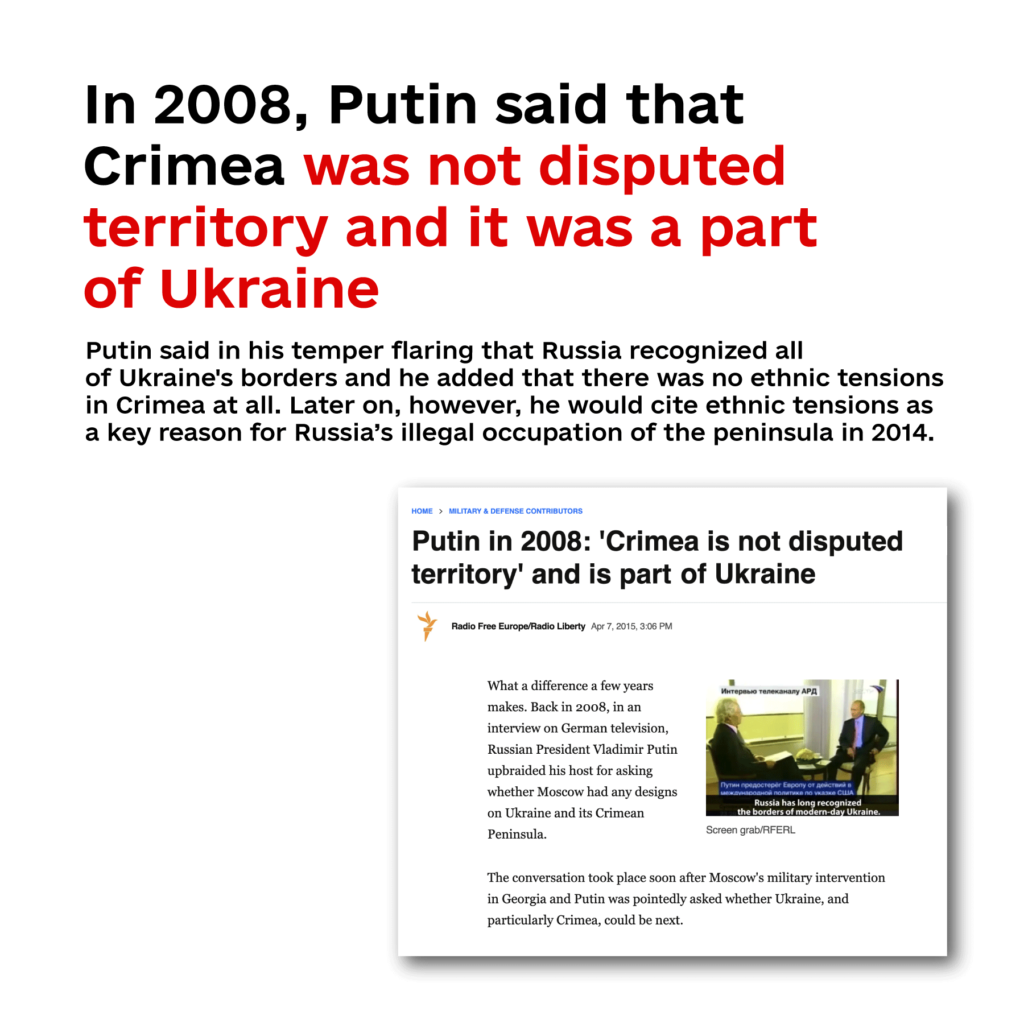 In 2014, Putin said there were no Russian forces in Crimea

Putin said that Russian soldiers had not occupied government buildings and had not surrounded Ukrainian military bases on the Crimean peninsula. Rather, he said, the heavily armed men were “local self-defense forces”. 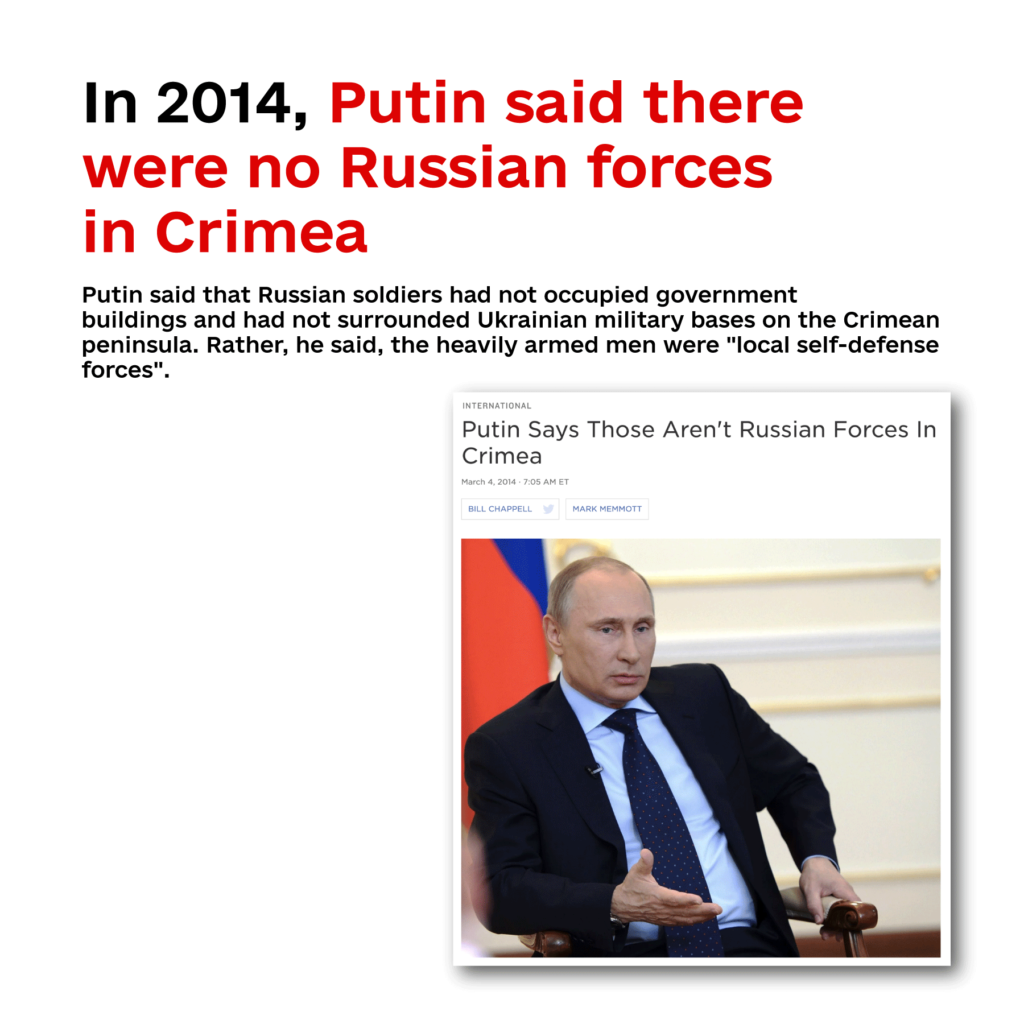 Then, in 2015, Putin admitted to Russia’s military presence in Ukraine for the first time 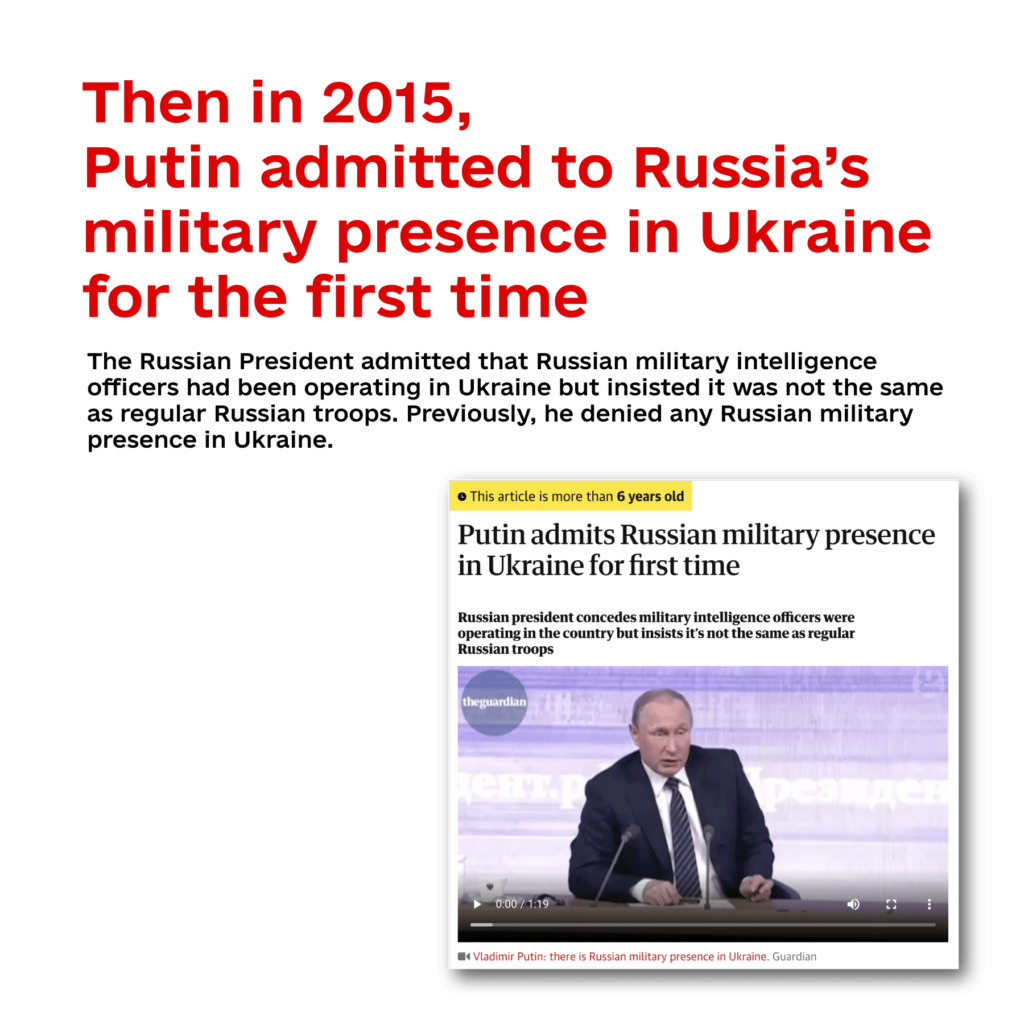 At the same time, in 2015, Putin recounted how he gave orders to “save” Yanukovych and “return” Crimea

Russian President Vladimir Putin said he ordered security officials in February 2014 to make plans to “save the life” of Viktor Yanukovych, Ukraine’s then-president, and to start planning for Russia’s annexation of Crimea. 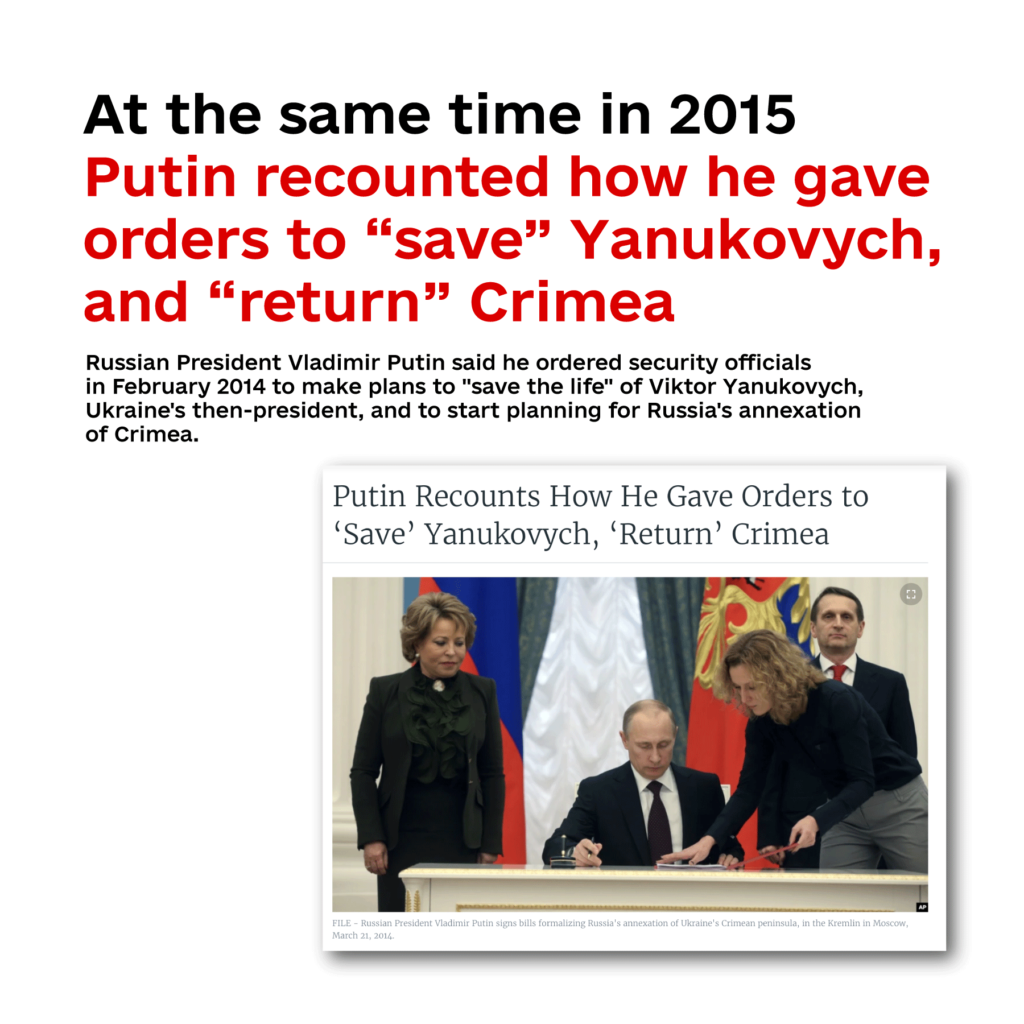 In 2018, Putin was reelected for another six-year term. On the eve of elections, Putin always starts a new armed conflict to consolidate his power and increase ratings. The illegal annexation of Crimea bolstered Russian President Vladimir Putin’s domestic standing, boosting his approval ratings from 60 to over 80 percent. But soon after the election, it began to decline again. 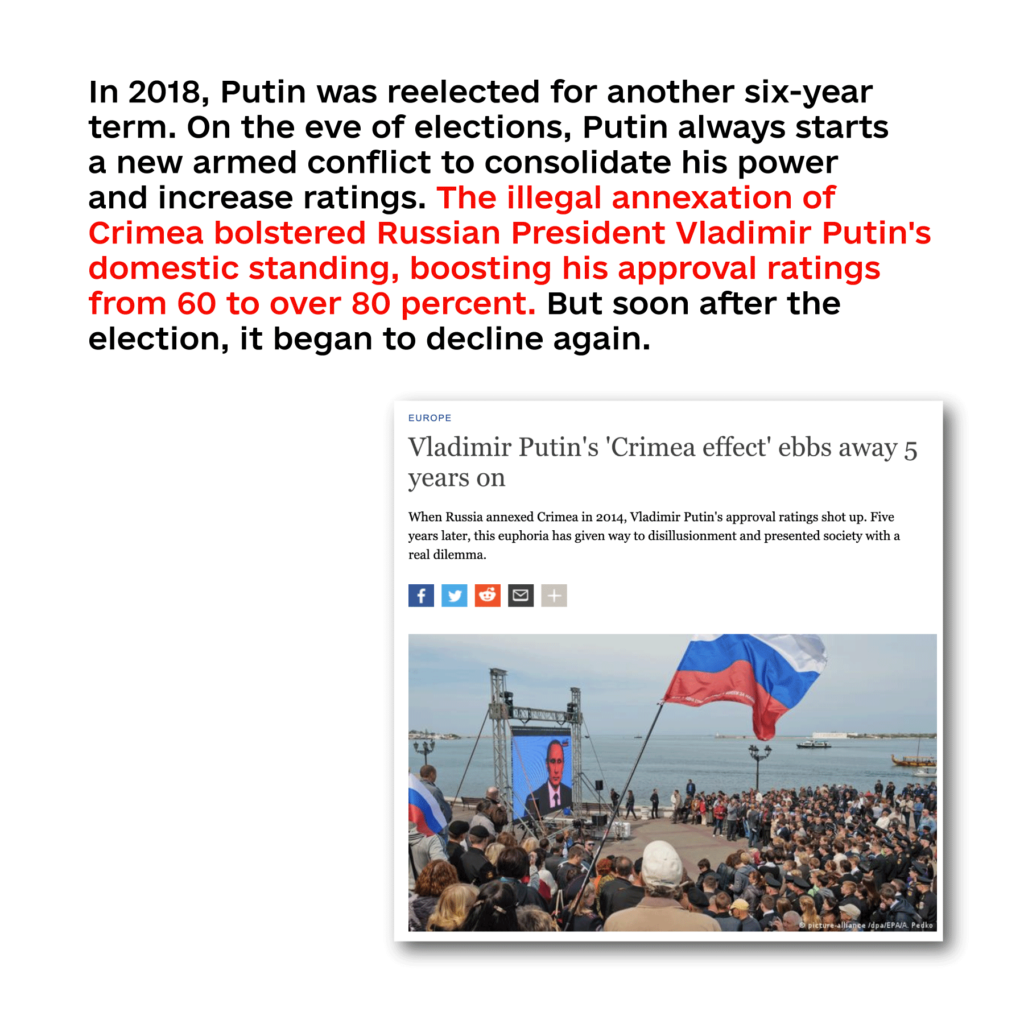 In 2021, Putin announced that he never intended to deploy troops in Ukraine. However, after the full scale invasion of Ukraine in 2022 Putin officially announced that the Kherson oblast should become a part of Russian Federation “as legitimate as Crimea” and he emphasised that the city of Kherson did not need a referendum because Kherson was  Russian territory for sure. 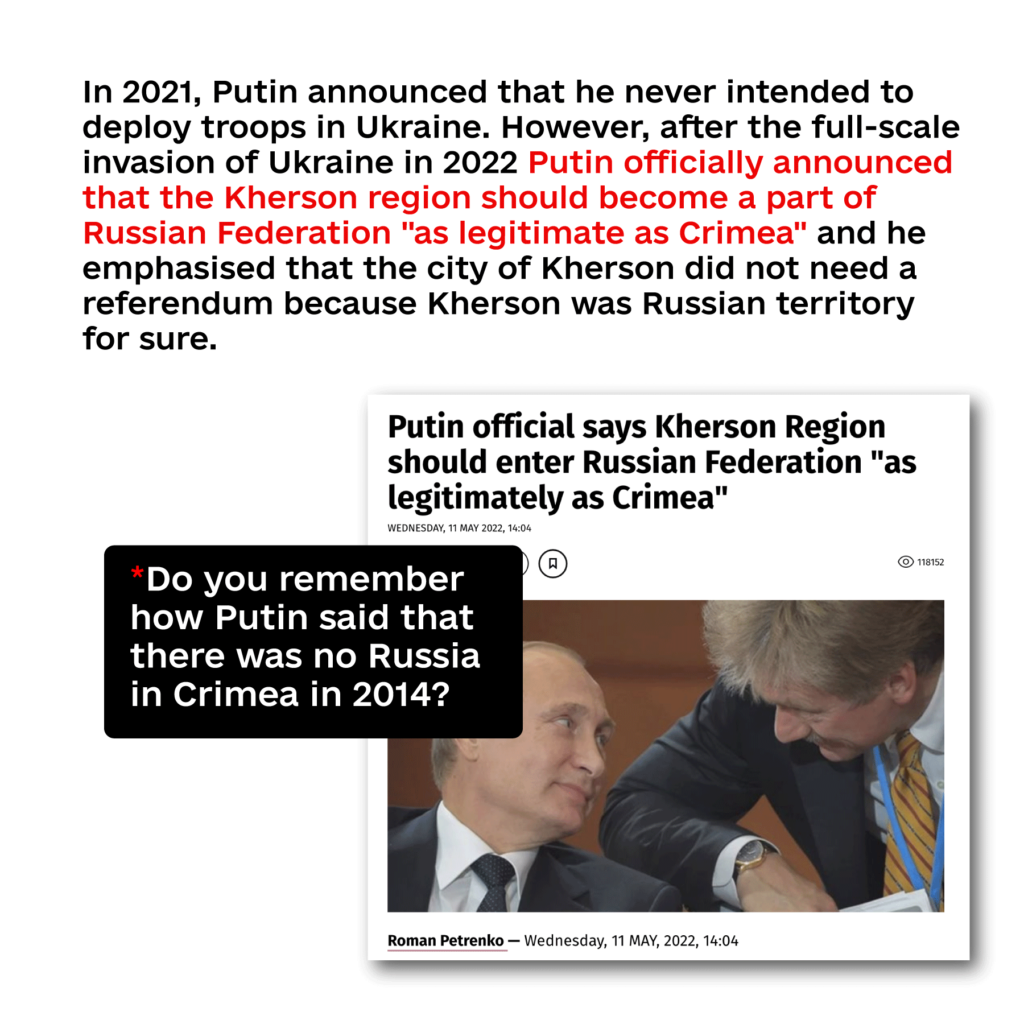 Russia has been violating its promises and not fulfilling its obligations. To stay resilient in the face of Russian propaganda, let’s remember its disinformation about Crimea.

Protect yourself and our world from Russian disinformation which serves to start wars! 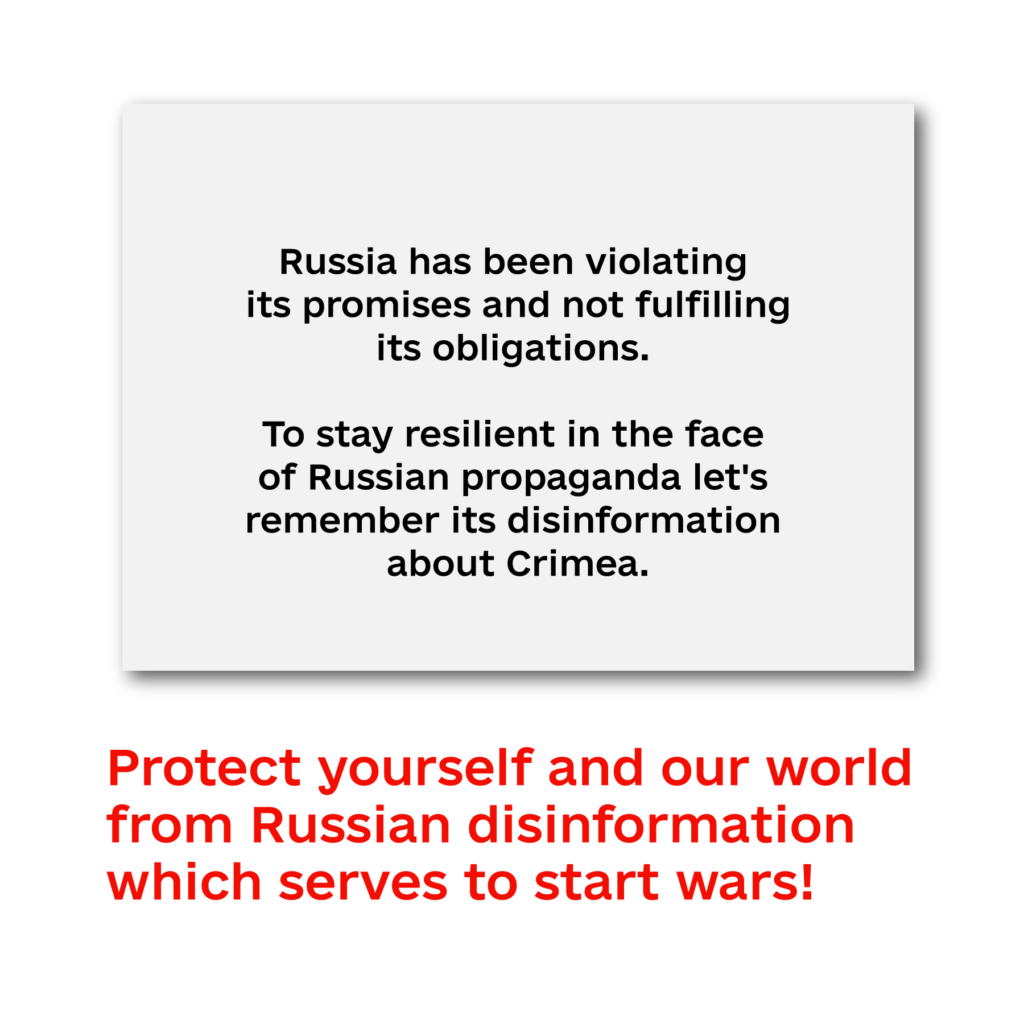