What threatens the world if Ukraine surrenders? 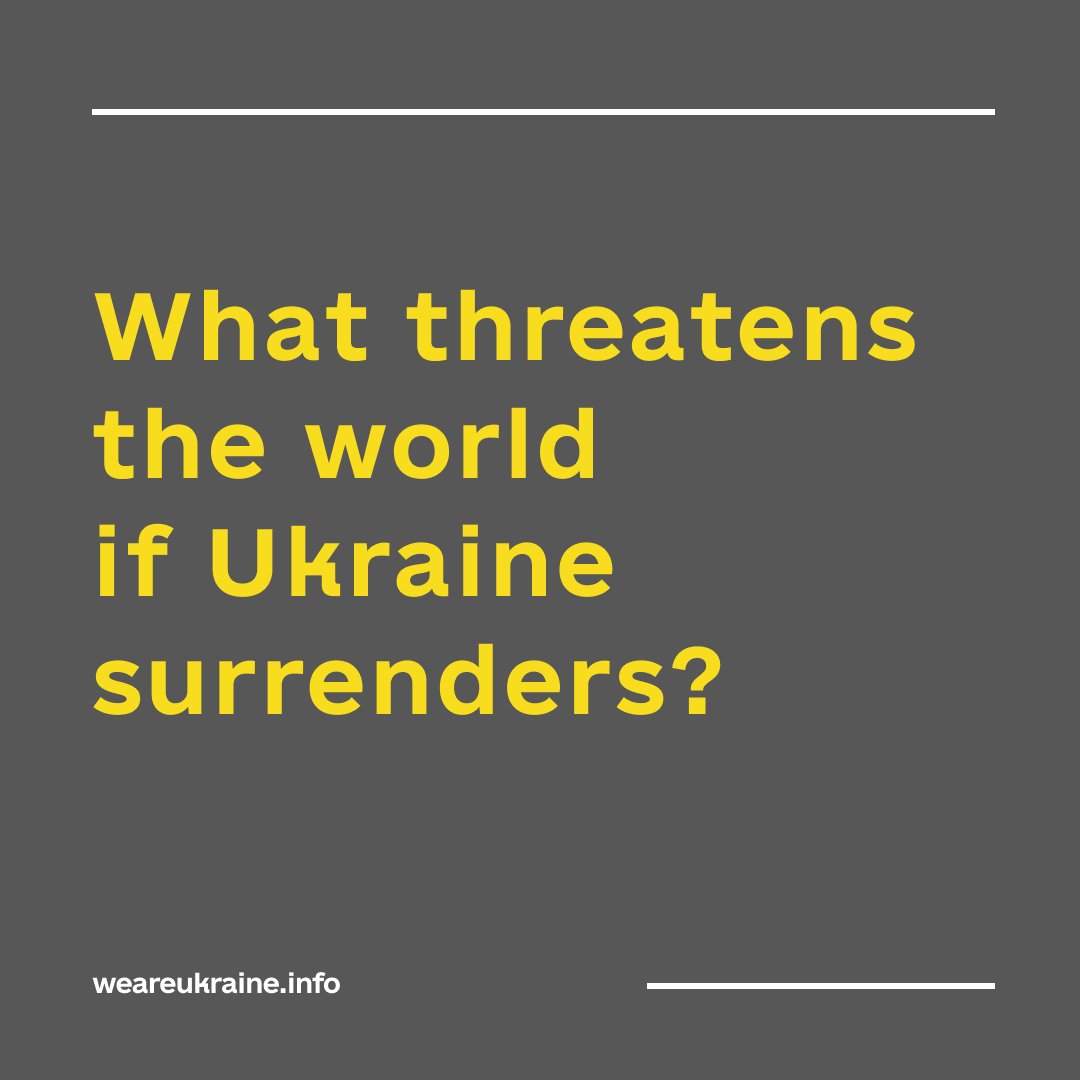 Russia’s brutal full-scale war against Ukraine has been going on for three months. In those three months, the world has seen Russia committing atrocities unimaginable to an average European: civilians tortured and killed, women and children raped, sites of historical and cultural significance destroyed, and thousands of buildings turned into rubble.

As such, the world has bore witness to the horrors endured by the inhabitants of Bucha, Irpin, Mariupol, Kharkiv, and other cities at the hands of the Russians and yet, there are still some who hesitate to endorse the only acceptable outcome of this war: Russia’s complete defeat.

Some, like the New York Times editorial team, call on Ukraine to make concessions to Russia and maintain that Ukraine’s victory in the war is illusory; others, like former U.S. Secretary fo State Henry Kissinger suggest Ukraine cede parts of its territory – some even go so far as to prioritise the need to ‘save Putin’s face’ and refrain from humiliation of the Kremlin over saving countless thousands of Ukrainians lives.

But the ongoing war is not just a territorial war between Ukraine and Russia; it is a fight between democracy and totalitarianism, independence and captivity, good and evil, light and darkness.

Here are some explanations from world-known historians, analysts and Ukrainian media why the defeat of Ukraine would signify the defeat of the entire world.

“Russian troops’ behavior in this war demonstrates that there is no international agreement that Putin can be counted on to respect. Regardless of what he might promise during peace negotiations, Western officials would have to assume that any Ukrainian populations handed over to Russia would be subject to arrests, terror, mass theft, and rape on an unprecedented scale.

The West should not aim to offer Putin an off-ramp; our goal, our endgame, should be defeat. In fact, the only solution that offers some hope of long-term stability in Europe is rapid defeat, or even, to borrow Macron’s phrase, humiliation.”

“So long as Nazi Germany seemed strong, Europeans and others were tempted. It was only on the battlefields of World War II that fascism was defeated. Now it’s back — and this time, the country fighting a fascist war of destruction is Russia. Should Russia win, fascists around the world will be comforted.”

If the NYT editorial team and Kissinger think that Zelenskyy must give up Ukrainian territory to end the war, will they make the same recommendation to President Tsai Ing-wen if the PRC invades Taiwan?

Normalizing annexation will have huge negative consequences for peace and security in Asia. To those engaging in it, please stop.”

“If the West rewards Putin for aggression and war crimes, then what disincentive does Putin — or the Kremlin — have to discontinue further wars of aggression against post-Soviet neighbors? After all, Ukraine is not the exception but the rule.

Until Russia pays a real price for its actions, Putin or those who follow him will simply regroup, rearm, and further Russia’s aggression. It is time to make this conflict the beginning of the end rather than the end of the beginning.”

“Given that the world widely expected Kyiv to fall within three days of a Russian invasion, it is the height of hubris to say what Ukraine can or cannot achieve on the battlefield. Given the horrors that Russia has inflicted on the areas it has conquered — which include rape, murder and deportation — it is the height of inhumanity to insist that Ukraine turn over any of its people to indefinite Russian occupation.

It is time to stop worrying about sparing Putin’s feelings. That is the mind-set that led to the invasion of Ukraine in the first place.”

“The feeling of impunity will be decisive for further tyranny, even after Putin leaves. The only question is when the next attack will take place and who will be its target.

If concessions are made, Russia will know that it can gain new territories and go unpunished because the West fears it. Russia is not the only country in the world that dreams of attacking another country. It is difficult to imagine a louder invitation for Chinese aggression against Taiwan than recognizing Russia’s land grab.”

“Make no mistake: If you appease a dictator, whose troops regularly indulge in war crimes, it will lead to a catastrophic geopolitical shift.

Ukrainian society will never agree to any concessions. Those who don’t understand this simple fact don’t understand Ukraine at all, and perhaps shouldn’t share their uneducated speculations in one of the world’s leading media publications.”

After three months of living under constant threats of missile attacks, bearing witness to war crimes committed on their land, and facing economic instability manifested in a volatile job market and food and fuel shortages, for 82% of Ukrainians, no territorial concessions are acceptable.