What UNESCO World Heritage Sites are now in danger because of Russian aggression against Ukraine? What UNESCO World Heritage Sites are now in danger because of Russian aggression against Ukraine?

Founded in 1945 as a specialized agency of the United Nations, UNESCO performs the mission of promoting peace and security through international cooperation in the fields of education, science, and culture, as well as protecting the world`s heritage.

Ukraine has been a member state since 1954 and has initiated a number of international programs and projects. It is a country with a rich centuries-old history, a meeting point for various cultures, and, as of August 2022, is home to seven incredible UNESCO World Heritage Sites, six of which are cultural sites and one — a natural site. Since the Russian invasion and temporary occupation of Crimea, UNESCO has been monitoring the situation on the peninsula within its field of competence. But right now it’s not able to protect the sites where the sound of air-raid alarms is frequently heard. Here are seven World Heritage Sites in danger:

Wooden Churches of the Carpathian Region

Sixteen wooden churches of the Carpathian region of Ukraine and Poland were included in the UNESCO World Heritage List in 2011, eight of them are located in Ukraine: St Michael’s Cathedral in Uzhok; the Church of the Ascension in Yasinia, Zakarpattia; the Church of the Nativity of the Virgin Mary in Nyzhnii Verbizh; the Church of the Holy Spirit in Rohatyn; Holy Trinity Church in Zhovkva; the Descent of the Holy Spirit Church in Potelych; and the Cathedral of the Holy Virgin Mary in Matkiv, Halychyna. Churches are built in four architectural styles – Galician, Lemko, Boyko, and Hutsul. This is an example of the already lost tradition of wooden construction. The Residence of Bukovyna and Dalmatia Metropolitans

It is a famous university campus in Chernivtsi that resembles a medieval castle. In winter, it looks like a snowy kingdom. The residence consists of three monumental buildings — the metropolitan`s building, the seminary, and the monastery with an arboretum. The residence reflects the cultural identity of the Orthodox Church during Austro-Hungarian rule. Both of these architectural complexes, located in the historic heart of Kyiv, represent the cultural heritage of the Middle Ages and the early modern period.

St Sophia’s Cathedral was erected by Yaroslav Mudryi (Yaroslav the Wise — tr.) in the 11th century, soon after the Christianisation of Kyivan Rus. It is one of the major architectural monuments of the early 11th century, which influenced the design and decoration of churches in Kyivan Rus and, thereafter, across Eastern Europe. St. Sophia Cathedral preserves one of the world’s largest ensembles of unique mosaics and frescoes of the first quarter of that century.

Kyiv Pechersk Lavra is a monastic complex of the Ukrainian Orthodox Church, founded in 1051. The Lavra’s spiritual and educational influence helped to promote the Orthodox faith and culture throughout Kyivan Rus, from the 17th to the 19th century. Kyiv Pechersk Lavra is an architectural ensemble with two unique underground complexes, alongside monastic buildings that took shape for almost 900 years. The buildings testify to the evolution in architectural styles and improvements in structural engineering. For a long time, the Kyiv Pechersk monastery was among the world’s most important Christian cultural and pilgrimage centers. Struve Geodetic Arc is a chain of survey triangulations that was established over a 40-year span in the 19th century, by astronomer Friedrich Georg Wilhelm Struve. The arc stretches 2,820 kilometers and passes through ten European states, from the Barents to the Black Sea. Its southernmost point is located in Ukraine, on the bank of the river Danube, in the village of Stara Nekrasivka.

Thanks to the Arc, scientists established the correct size and shape of the planet Earth and proved Newton’s theory that our planet is a three-dimensional oval. 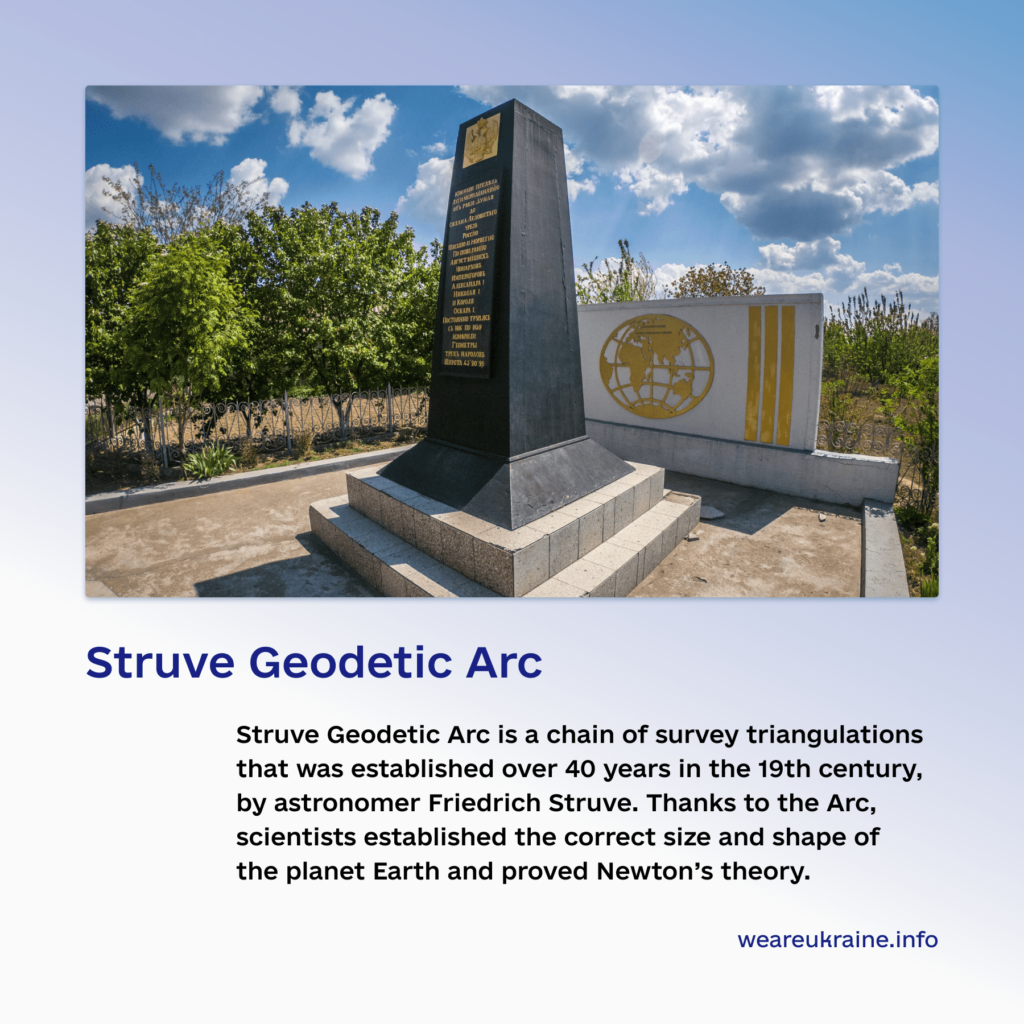 Lviv — the Ensemble of the Historic Centre

The whole ancient part of Lviv city has been enlisted as a UNESCO World Heritage site. The city was founded in 1254 and has never changed its name. Lviv has the largest number of architectural monuments in Ukraine. To name a few – the Town Hall, the ensemble of Rynok Square, the Black House, the Kornyakt Palace, the former Dominican Church, the Royal Arsenal, the Powder Tower, the City Arsenal, the Bernardine Monastery, the Latin Cathedral, St. George’s Cathedral and others. Virgin Beech Forests of the Carpathians

78 separate forests are located in 15 countries, and 12 (25%) are in Ukraine. The primeval beech forests are an example of untouched ecosystems in the temperate zones. They provide a valuable genetic pool for the European beech tree and the best conditions for carrying out research into its evolution. 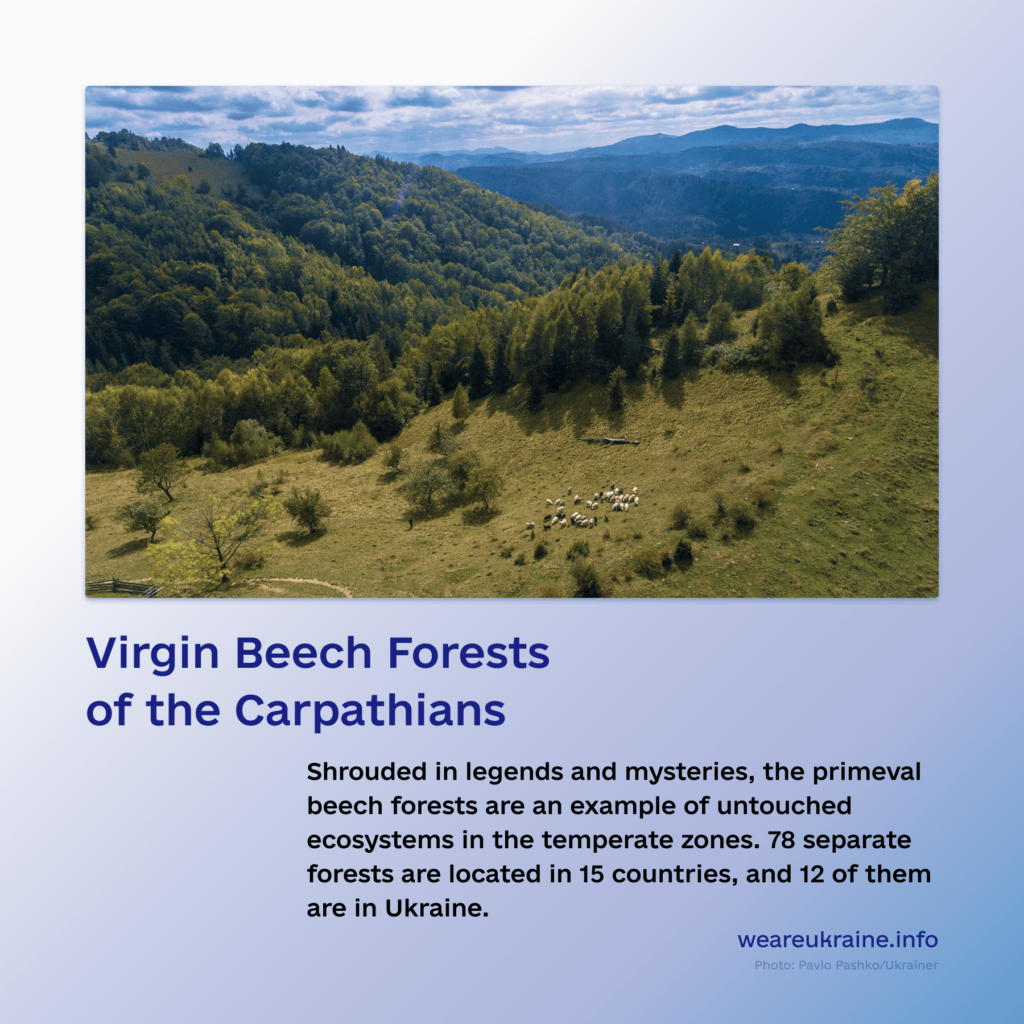 Chersonese (under Russian occupation since 2014)

The ancient Byzantine city-state of Chersonese Tavria is located in the southwestern part of occupied Crimea.

It was founded by Greek in 422-421 BC. Chersonese was an important political, trade, and craft center of the peninsula in ancient times. The history of this city is part of the history of Ancient Greece, Ancient Rome, Byzantium, and Kyivan Rus.

Due to military and commercial use of the site under Russian occupation, the world heritage site of Tauric Chersonese is threatened with destruction. One of its ancient chora plots was destroyed in 2015. 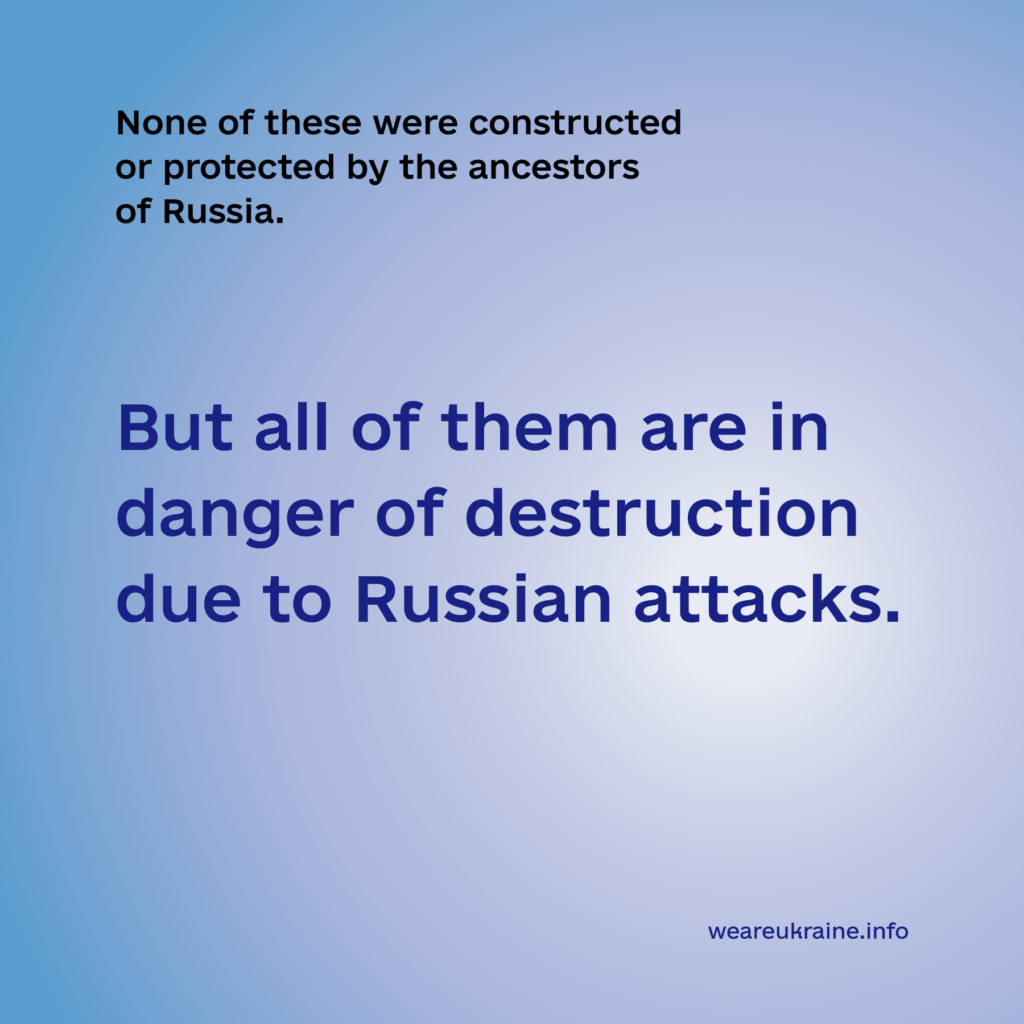